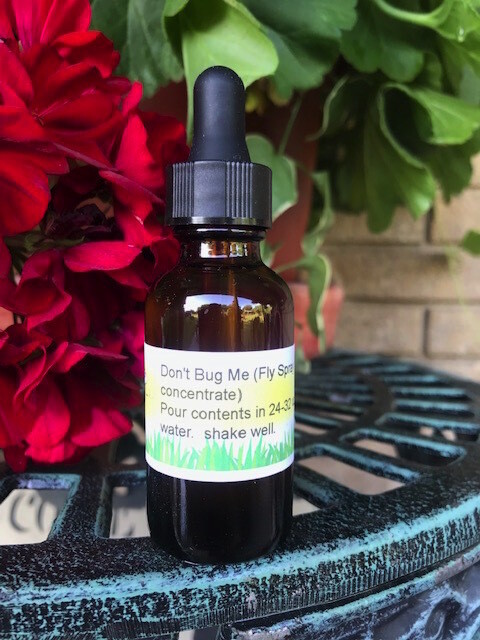 Finally!! A Fly Spray that is also Therapeutic! You can spray this around the face, eyes and I like to spray my feed buckets to keep flies out! This is a blend of 10 Essential oils that are known for their bug repellent abilities also! Oils like Peppermint, Cedarwood, Pennyroyal and Citronella. It is all organic, pesticide free and safe for horses, humans and dogs! (No CATS!). It also has coconut oil in it so it conditions the hair/skin as you use it. The oils in the blend are invigorating, uplifting, anti inflammatory, wound healing, calming and safe! It is safe to use with DMSO on horses/humans.

*Always check with your Veterinarian before using a new product or supplement. Essential Oils are not intended to treat, diagnose, prevent or cure any disease.

Directions: Pour Concentrate in spay bottle and add 24-32 ounces. You can mix it as strong or as diluted as you wish!

Save this product for later

This product is awesome! I had a mare get a bad abscess that involved coffin bone. She was in alot of pain in this foot and it had alot of drainage. I purchased this product and began applying daily after soaking her hoof in Epsom salt and her hoof began to have less heat and she used it more willingly. Her hoof healed incredibly fast for how severe the abscess was and I attribute alot of that to the increased blood flow that the hoof stimulator helped with. I also had a mare who was lame on one foot out of the blue! I applied a dab of the hood stimulator around her cornet band and gave her some morphine bomb drops and let her sit for 30 min and my daughter was able to ride her that evening without a limp! We later had foot x-rayed and it should some arthritic changes and slight inflammation but these 2 products help keep her going without pain.